The A.D.: New Orleans After the Deluge website on SMITH was down for a while, but recent events with hurricanes Harvey & Irma made it imperative to get it working again—and so it is: smithmag.net/afterthedeluge. This terrible 2017 hurricane season obviously brings back memories of 2005 (and for older folks, previous big hurricanes that hit big cities). As I wrote in the book’s afterword, the stories in A.D. are highly specific yet somehow universal, and over the years I have found in my discussions about A.D. that the experiences of the real-life characters therein resonated strongly with other hurricane survivors in so many ways. People told me this over and over as I traveled around promoting the A.D. book—in New Orleans (of course), in Houston, in Miami, and even in New York City. By connecting to the stories of Denise, Leo, Michelle, Hamid, Mansell, Kwame, and the Doctor, people gained comfort—and context—for their own experiences.

Watching Harvey and Irma, the cycle feels so similar: tracking the storm, deciding whether or not to evacuate, dealing with the wind damage and flooding, confronting loss—of people, possessions, community—and the long rebuilding process. These are the perennial issues brought on by these epic man-vs.-nature events…

The New York Times‘ coverage of the storms has been particularly good, and these stories reminded me so strongly of specific moments from A.D.:

“Irma Shifting Forecasts: It’s All a Matter of Probability”  evokes “Should I Stay…” 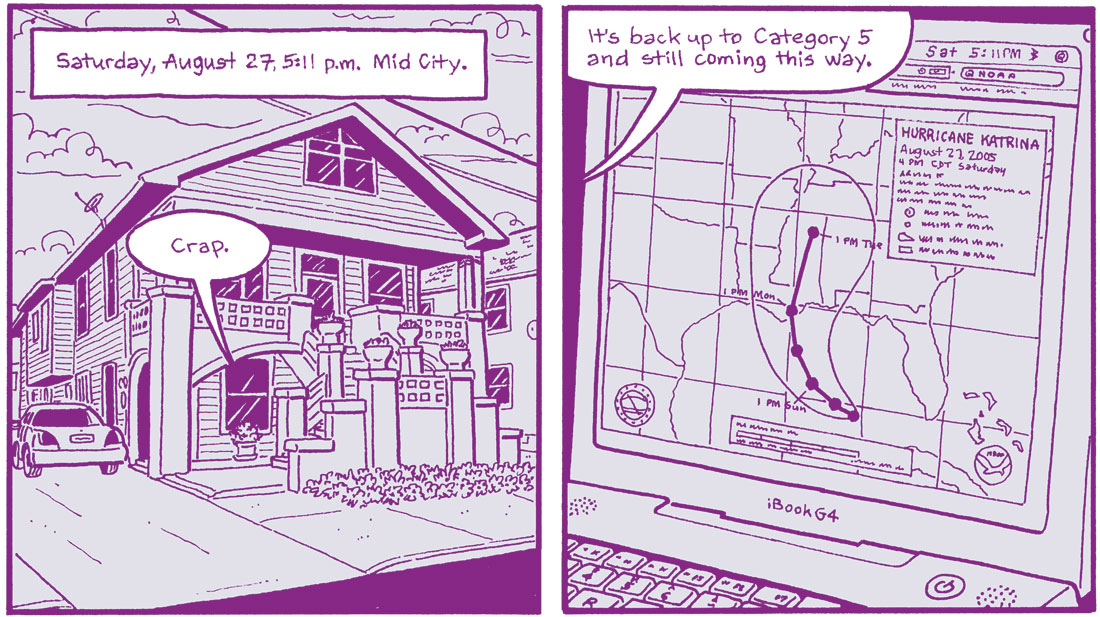 The Daily story, “How Houston Was Built to Flood”  evokes the Prologue, Part II—“The Storm” 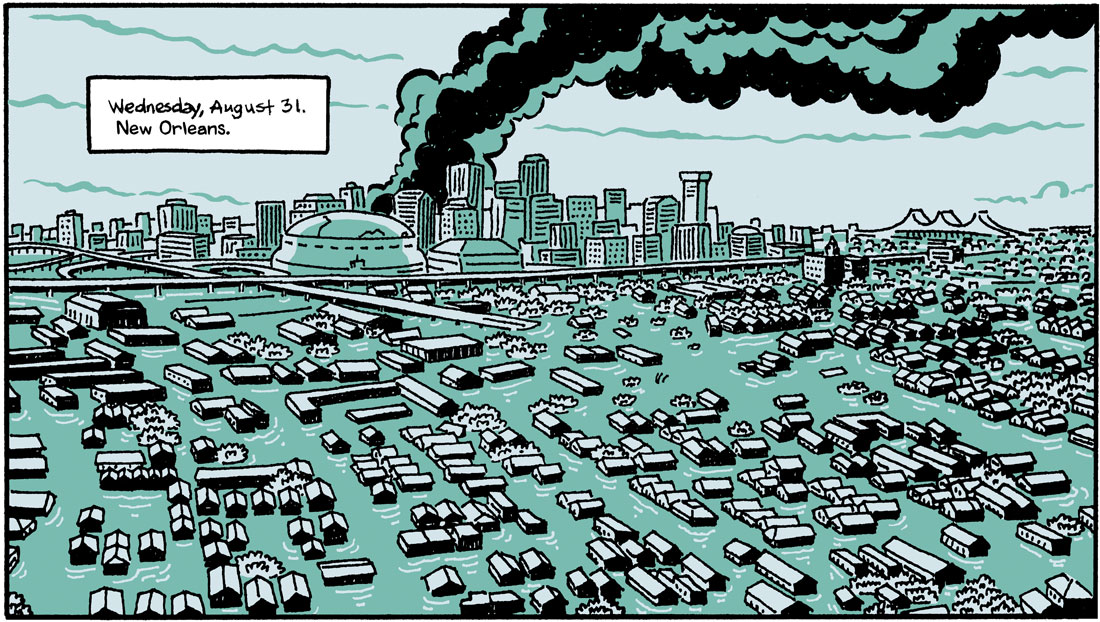 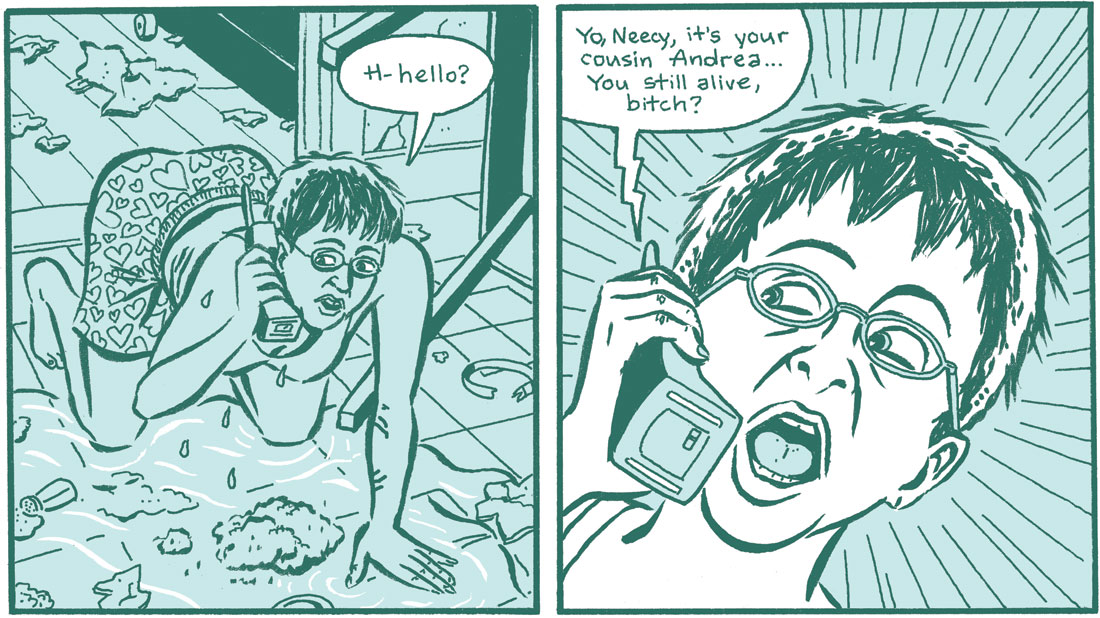 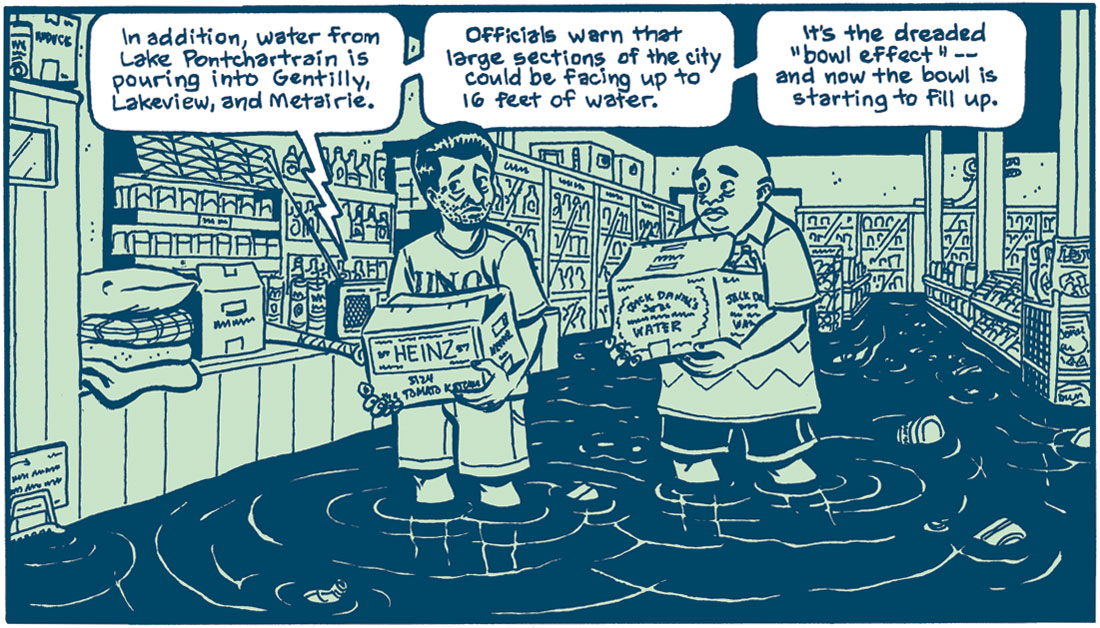 The Daily 360 piece “On Submerged Streets: ‘Houston Has Come Together'”  evokes Chapter 10—“Something in the Water” 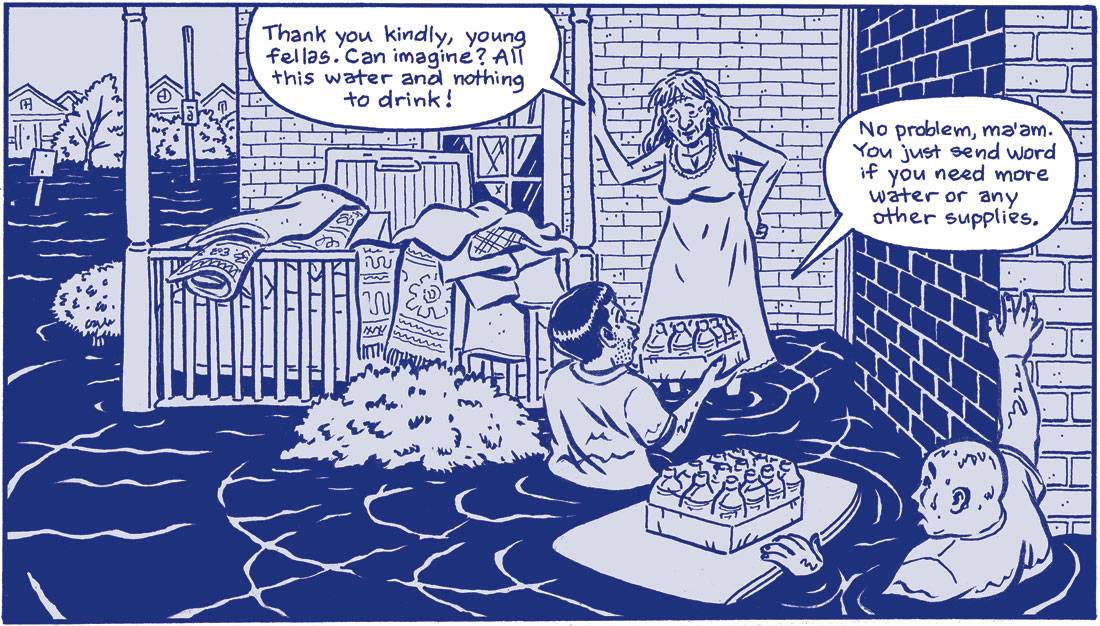 The photo essay “What They Saved: Texans Reflect on Treasures Plucked From Harvey”  evokes the epilogue, “Picking Up the Pieces” 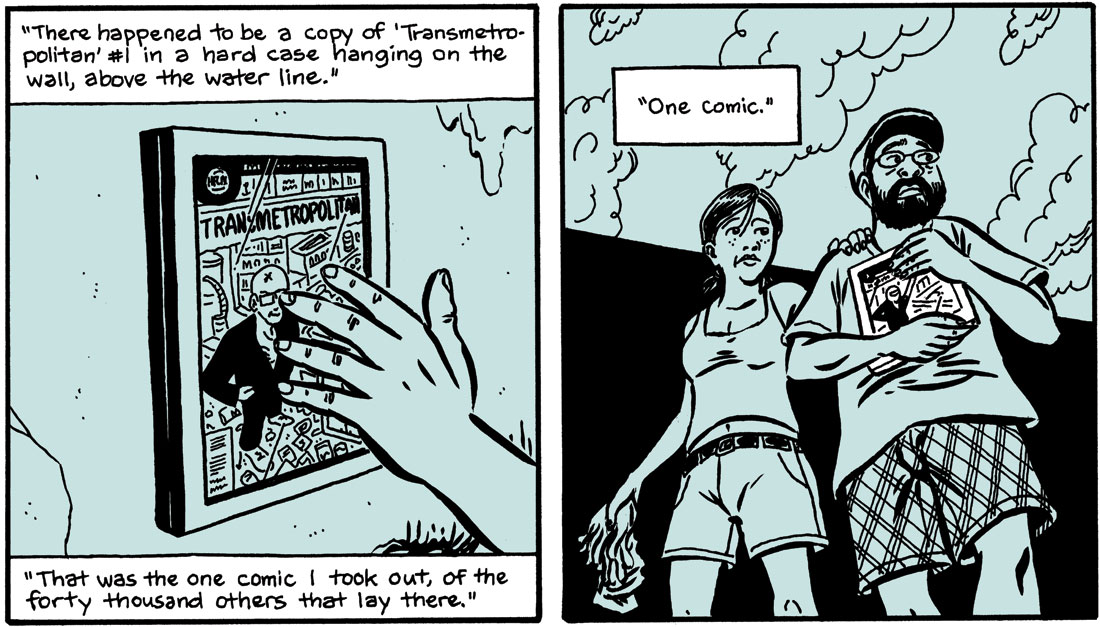 … as does “We Lived Through a Flood. Now We Have a Very Long To-Do List.” 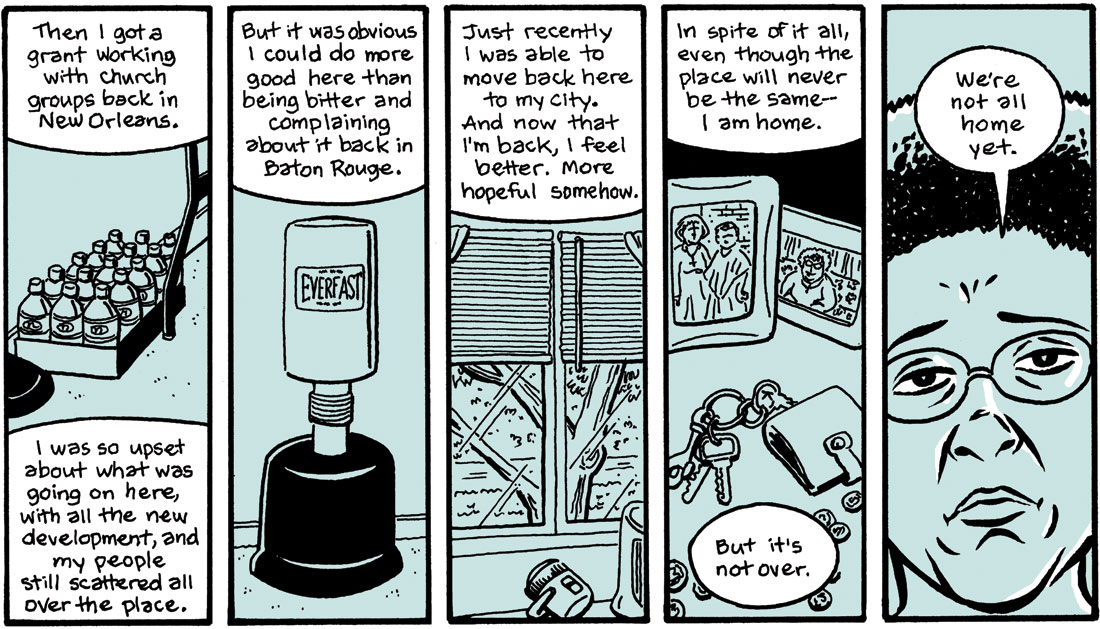 Part of the A.D. experience on SMITH was the links embedded within certain panels that extended the story in various ways: to hurricane resources, YouTube videos, audio clips of the various characters. As part of resurrecting the A.D. site, I also updated all those links, which to my mind all remain relevant for these storms 12 years later. My hope—as it always was—is that the stories of the various real-life people from A.D. continue to give solace and understanding to this new generation of hurricane watchers and survivors.

Unforgettable, breathtaking chronicle of New Orleans before, during and after Katrina. I guarantee you will hungrily devour this beautiful, heartbreaking project. and sit there cursing out your browser for its sluggishness.

‘s Next Door Neighbor series, to Emily Steinberg’s Graphic Therapy. It traces the history of comics on SMITH, the transition from the web to print, and looks at the future (including a "secret project" from Harvey Pekar!). Check it out: http://www.publishersweekly.com/article/CA6657629.html?nid=2789

Done! On Thursday I uploaded A.D. to the Random House/Pantheon FTP. Finally, after two solid years on the project, I completed the book.

This last deadline was by far the toughest, requiring me to basically work nonstop from Thanksgiving ’til Thursday, and even demanding an all-nighter right up to the very end. (I was up continuously from 8:30 AM Wednesday ’til about 11:30 Thursday. Then I took a two-hour nap and fine-tuned things until about 10:30 that night. Ugh.) I’ve had my head buried deep into the book for the last 45 straight days, and am just now starting to blink my eyes and look around again.

Thank you, Sari, for picking up all my parenting slack! And thank you, Rachel and Ben (my assistants), for all your hard work down the stretch run. Last of all, thank you, Charlie Orr, for coming in with a week to go and putting together an awesome publication design.

The Pantheon version of A.D. will be greatly expanded from the online version, with lots of new material covering the Convention Center and the characters’ lives since the hurricane. In total, there are 65 new pieces of art out of a total of 290. The reason I call them "pieces of art" instead of "pages" was because of the format I drew A.D. for the web, where each "page" of the web version became in essence half a page of the book version. Forget it, it’s too complicated. The simplest thing is to say that the book will have nearly 25% more original art — as well as major revisions, text changes, and re-colorizations of the previous work. The whole thing is gonna weigh in at just about 200 pages.

Much more to come on that front.

Just in time for the 3rd anniversary of Hurricane Katrina (and in the shadow of the approaching Tropical Storm Gustav), SMITH has just posted the final chapter of "A.D."

Finally, after a year and a half, and 15 chapters, "A.D." concludes its online run with a final look at all our characters. In this extra-long chapter — which picks up a year and a half after the hurricane — we find out about Denise’s escape from the Convention Center; Hamid & Mansell’s rescue from the flooded store; Kevin’s years-long odyssey; the Doctor’s formation of the New Orleans Health Dept. in Exile; and Leo & Michelle’s return to their flooded home. And your humble author even makes a guest appearance.

On this third anniversary of Katrina (and on behalf of SMITH), I want to thank every reader, blogger, journalist, and teacher who believed in "A.D." And of course a special thanks to Denise, the Doctor, Leo, Michelle, Hamid, and Kevin, all of whom courageously and graciously shared their stories with us.

Now, I will get to work on expanding "A.D." into a full-length book from Pantheon (due out NEXT summer, on Katrina’s 4th anniversary).

So nice: “It’s a lovely strip, captured mostly in golden colours like a late evening sun, hinting at the colours of both the neighbour’s bees and the honey they made, as well as that sort of gentle warmth you feel when thinking back to days past, suffused with a nostalgia but also some melancholy at the passing of time and people in and out of your life as you grow older.”

Sari & I have collaborated on a “Next-Door Neighbor” strip for SMITH Magazine. “NDN” editor

solicited a piece from me, and Sari came up with a great story from her childhood (and beyond) called “The Beekeeper.” Last week, after putting A.D. chapter 13 to bed, I put the pen to the grindstone and got  our little collaboration drawn. We’re both pretty happy with the results. Why don’t you check it out and see if you agree?

A.D.: New Orleans After the Deluge returns with a new installment, “If It’s The Last Thing We Ever Do…” Denise and her family are still trapped at the New Orleans Convention Center. The New Orleans police roll by in armored SWAT vehicles, with rifles loaded — but no food or water. This penultimate chapter of the A.D. saga on SMITH tells the real story of what went down at the Convention Center in the days after Hurricane Katrina.

Just posted on the spiffy redesigned SMITH site is A.D. Chapter 10: “Something In The Water.” In this episode, the Doctor administers first aid to Katrina survivors gathered at (of course) a Bourbon Street bar. Meanwhile, Hamid & Mansell wade through the chest-high flood waters to bring much needed drinking water to an elderly neighbor. Back in Tallahassee, Kevin and his brothers learn the extent and seriousness of the flooding. And Denise and her family arrive at the Convention Center. And of course the A.D. site features all the usual links, resources, audio clips, press clips, and message board chatter.

This seems to be the week for Not Quite What I Was Planning: Six-Word Memoirs by Writers Famous & Obscure, the new book from SMITH Magazine (yes, the same SMITH which publishes A.D.). The book’s been getting tons of press, including an excellent interview with co-editors Larry Smith and Rachel Fershleiser on NPR’s “Talk of The Nation.”

Sari (who’s also a contributor: “Suburban girl tries to make bad,” p. 152) and I (and little Phoebe) dropped by Housing Works this past Saturday night for the Not Quite What I Was Planningrelease party, where we saw fellow 6-word-ists man_size, bobfingerman, sazzabee, dangoldman, and jahfurry, as well as about a million other people. (I also had the pleasure of meeting, in person for the first time, SMITH co-editor Tim Barkow, who designed the amazing comics interface that makes A.D. real so well.) It was quite a scene! Phoebe, as usual, stole the show, and she even appears (twice) in a video shot at the party by Jason Boog from The Publishing Spot. Sari & Phoebe come off great in the video, but for some reason, my voice sounds exactly like Kermit the Frog’s. Ugh.

There’s also a funny riff on the book’s premise on PublishersWeekly.com today, imagining 6-word-memoirs by classic writers of the past & present. Some of them are quite amusing, even though some of the writers who are spoofed — like Joyce Carol Oates — actually have 6-word-memoirs in the book! And contributor Frank Gilroy is putting together a registry of Not Quite What I Was Planning memoirists and their websites.

So forgive my bias when I say the book isn’t just a quick novelty piece, but something real and trenchant and worth reading. After all, Vanity Fair says the little book “will thrill minimalists and inspire maximalists,” while Publisher’s Weekly finds that it makes for “compulsive reading and prove arguably as insightful as any 300+ page biography.” Go ahead and buy a copy or two. It’ll be the best $12 you ever spent to support a great online journal, and provide yourself with some fantastic bathroom reading.

Oh, and go ahead and submit your pithy memoir to sixwordmemoir.com — rumor is that a sequel is already in the works.

I am the writer/artist of the nonfiction graphic novel A.D.: New Orleans After the Deluge (Pantheon). I illustrated the bestselling graphic nonfiction book The Influencing Machine: Brooke Gladstone on the Media (W.W. Norton). I am the co-editor of FLASHed: Sudden Stories in Comics and Prose.